THE BOON OF LAZINESS 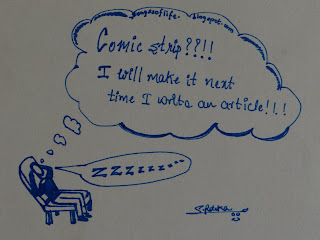 Is it the last day to pay the bills!! It is already midnight and tomorrow is final submission of assignment! You want me to go to the flour mill! But there’s lot of wheat flour with us to manage for another three days, let’s finish it first! Getting up early! What does that mean?  I am already late for work, but just one more work remaining to be done. And the most usual phrase- It has 2 bars left! Let me use my mobile for some time more before I plug it for charging.
Such people are usually termed as LAZY! But according to me it’s a very biased way of analysing the trait of character of a person. I, who have shown such traits right from my childhood and continue to do so, have some points in favour of our flock.
First point I put forward is that we are not lazy, but we like to get fullest of everything! We like to exploit the resources, squeeze it as much as we can. We anyways have to charge the mobile, why not use it till it’s nearly discharged and charge it at once altogether. If this is followed daily, you have to get parted from your cell for lesser time than in the earlier case. Postponing a job is not cancelling it altogether. It’s just like keeping the ice cream aside till you finish off your pudding. This time which you get can be utilized in doing some other work. 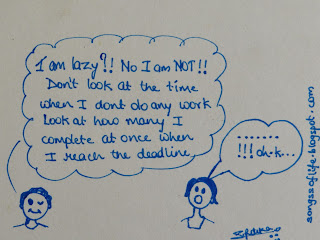 Secondly, in this world full of monotonous unadventurous activities, it adds a thrill to our life. You have to do a job, you accomplish it-It’s over. Nothing’s left. But if you keep the same task till the deadline, it adds thrill to your life. Standing in the line to pay the bill with 10 people in front before half an hour of its closure is not a child’s play. Completing the assignment just minutes before submission gives the much needed adrenaline flow, adding adventure to your life.
Third point is that when a job is done at the eleventh hour, it takes far lesser time than in usual routine. It can be said (even statistically proven by our cult) that the nearer we are to the deadline, more is the efficiency and time taken is less. In the nick of time, our mind is vigilant, muscles are agile and we are ready to complete the task whatever it might take. 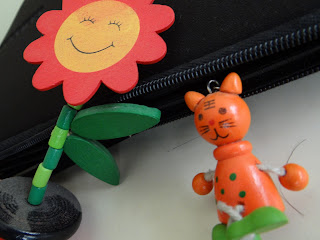 Fourth and the most important point- It takes guts to be lazy! It tests the risk taking ability of a person. An ordinary person can’t handle the pressure surmounted while performing a job at the last moment. But we, the so called lazy people are well adept at handling it due to the armour of complacence with our maximum efficiency at critical conditions. As I mentioned earlier we want to get the fullest of everything, how can it be any different when it comes to dealing with ourselves … what you think!! J
S. RITIKA
Posted by S. Ritika at 11:05 AM No comments: 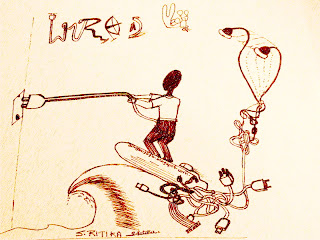 Wires are everywhere-from the tail of our e-mouse to the umbilical power cord. Few years ago, it was the sky which was dressed up in wires. Be it electric lines, telephone or cable connection- there were lines all over our head obscuring the sky. Gradually there were technological advancements and the term wireless got more significance than just another TV remote control. God's own devices appeared in the form of Mobile phones and laptops giving unimaginable power to common man. They could do wonders. But these great gadgets were followed by some eternal connections -charger, head phone, USB, HDMI etc. If they seem a manageable handful, think again my friend! There’s an exclusive set of these for each gadget we are so accustomed to use! Packing them is yet another meticulous job. While travelling, I have a bag inside my luggage exclusively for these wires which contains individual pouches for each gadget of mine. 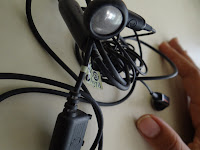 Why can't the head phone just be as it should be! No matter how hard I try, keeping it tidily, it’s a mess when taken out the next time. Half of my energy, time and good mood get wasted in unraveling the mess. You have to carefully find the knot, force the bulky ear bob into the loop loosened beforehand to ease the procedure. One mistake and you are doomed. If it gets entangled even more it will mean more perspiration.
Knot by knot you untangle it and at last the feat is
accomplished and you think that it's done! But no nono no-no no! You suddenly realize that one of the ear bob’s cover has been lost in this fiercely battle. You mourn on its demise, plug it into your mobile and you are all ears but again a technical difficulty arises. Having lived in India for so long (and due to your negligence to the ‘Handle with care’ sign), it needs some adjustments. Adjusting the pin, rotating it in all the directions, forcing it out halfway, all in an attempt to get that perfect alignment which will fill your ears with the rhythm-And the struggle pays.  You are successful. For hours you wander in your own world till the row of battery stripes get near extinct and you have to rush in emergency to find the savior for your dying pal. The charger! It's the thing most sought after in the modern world. One wonders the places it wanders to. From top of fridge to below the bed, be it alone contemplating in a cupboard or just hanging out in some forlorn switch board! It just ends up in a place where one doesn't search for it. And one wonders how it can keep exploring new places. 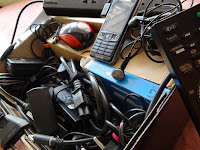 Fed up of all these wiry menaces my mom designated a box to shelter these poor homeless creatures. One whole day the dwellers inside and outside the box were in peace. But it's the law that disorderliness increases. Now one can often find them peeping out of the box, basking over a table top or even lying unnoticed on the floor. As wireless technology is advancing, newer gadgets are being marketed and each brings home more wires, hence more menace…….......
Life is not that easy in a wireless world of wires…...just think about it.

My take on the happenings/ non-happenings of my daily life. I like to look at things from a different angle and attempt to spice it with humor. I think of myself as a situational writer, hence 'R'ituational.